This section of the website is dedicated to the preservation of the long 75 year history of SESCAL when it was sponsored by the FPCSC and to the people who helped the Federation and philately during those years.

The most prestigious award presented by the American Philatelic Society to a living philatelist for distinguished contributions – to Philately, to Research, and to the Society.

The Luff Award was established in 1940 in memory of John N. Luff, APS president from 1907 to 1909, who was considered the most prominent American philatelist of his era. View a listing of Current Honorees or Previous Honorees

The APS Luff Awards are available annually for: 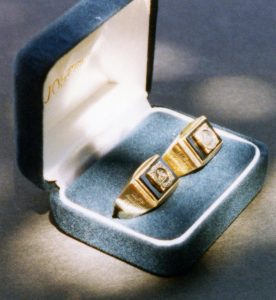 Luff Rings – One Given to Each Recipient

SESCAL Bourse Chairman Fred F. Gregory, of Palos Verdes Estates, California, is the 2017 recipient of the Luff Award for Distinguished Philatelic Research.  A stamp collector from boyhood, Gregory, is a member of the governing boards of several philatelic organizations, and has focused his philatelic interest on the stamps and postal history of 19th-century Hawaii for the past 40 years.

He has authored numerous articles on Hawaiian stamps and postal history. He authored “Hawaii Foreign Mail to 1870,” an award-winning three-volume set published by the Philatelic Foundation in 2012. The set earned awards at the national and international level, including the Grand Award and Gold Medal for Literature at StampShow 2012; the 2012–13 Ashbrook Cup, awarded by the United States Philatelic Classics Society, and a large gold medal at World Stamp Expo 2013 in Melbourne, Australia.

Under the new sponsorship of the Philatelic Society of Los Angeles, Fred still servers as SESCAL’s bourse chairman.

Robert de Violini of Oxnard, California received his award from the APS for Outstanding Service to the Society. He joined the Society in 1970 and in 1981 became the AFS Affiliates Coordinator.  During his term as coordinator, the number of Affiliates more than doubled from 91 to 198.

He wrote a monthly column for The American Philatelist about these specialty groups.  De Violini activated the Philatelic Computing Study Group and with the help of his wife Lois assisted the APS in establishing its own website.  He served SESCAL as Chairman of the Literature Exhibit until his death in 2004.

He  was an organizer and executive director of OLYMPILEX 84, as part of the Olympic Arts Festival in Los Angeles.  He was President of several philatelic organizations including the APS Writers Unit, American Society of Polar Philatelist and the Philatelic Computing Study Group.

In 1993 the honorees where Calvin Walters “Burt” Christian  for Distinguished Philatelic Research.

Subsequent to World War II, Bert embarked on a quest to assemble outstanding collections of the I¢, 3¢ and 10¢ values of the 1861 series.  He was eminently successful in this, and his exhibits won many national and international awards.

He was a prolific writer, and his articles appeared in most of the major philatelic journals of the period.  He was particularly supportive of the Classics Society. His work appeared in many issues of the Chronicle.

During the years, Bert corresponded with many of the outstanding philatelic students of the day such as Brazer, Perry and Ashbrook.  He appreciated their support and help in providing answers to difficult philatelic questions, and followed their lead to share his accumulated knowledge whenever possible.

Lois was was honored by the APS for Outstanding Service to the Society.  She has served the APS and the APRL in many capacities:  a member of the APS Recruiting Committee, Secretary, Treasurer, Chair of Board of Vice Presidents, Director, Exhibit and Literature Judge and APRL foundiing member, Treasurer, Trustee, and Librarian (1974-1979).  For over 50 years she has served and is serving as a members of the APS Expert Committee.

She has served as Secretary-Treasurer of the International Society for Japanese Philately.  She still serves as a member of the ISJP Board of Directors and as chair of the mini-expert service and digital scan service for Japan classic stamps and postal stationery.  Also she is an ISJP webmaster.

Japan was her major collecting interest and her exhibit won two gold medals in international competition, and s WSP Grand Award.  This collection was sold at auction in Hong Kong in 2013.

A series of articles, completed in 1971, won her the Anna Marie Chemi Trophy for the best serialization published in The American Philatelist that year.

in 1994, the Federated Philatelic Clubs of Southern California honored her in 1994 with their Distinguished Service Award.

She was Treasurer of the Federation and SESCAL. She was SESCAL’s Secretary to the Philatelic jury.  Under the Philatelic Society of Los Angeles, she still serves SESCAL as Treasurer, and Chair to the electronic exhibition of literature articles.

Gene (as he was know) was honored for Outstanding Service to the Society. Tinsley served as the APS attorney (1961-1965) and was a member of the APS Board of Vice Presidents (1965-1969) .  He was one of the “Committee of Five” who led the APS effort to put the notorious forger Raoul Ch. De Thuin out of business.  The story of their successful operation is presented in the APS publication, The Yucatan Affair (1974, reprint 1980.

Tinsley was an outstanding collector, author and judge.  His most important collections were classic Mexico and Tasmania, but he also collected and exhibited the Netherlands, Transvaal, and the postal marking of Edinburgh.  His exhibits won many national and international awards.  He was a prolific writer for several specialty journals including MEPSI’s Mexicana.  His book Tasmania – Stamps and Postal History, published by the Royal Philatelic Society, London, 1986  won a gold medal at the INDIA 89 exhibition.

Emerson won the 1980 aware for Outstanding Service to the Society.

Emerson’s Served the APS in many capacities: as a Recruiting chairman (1969-1973); as an editor of the Chapter New Letter (1960-61); as chairman of the Board of Vice Presidents (1966-69), and as President (1973-1977).  In 1980 he was serving as chairman of the joint committee that drafted the ethics policy adopted by the APS, the Society of Philatelic Americans, and the American Topical Association.  He has served in other capacities as well, representing the APS in the United States and overseas.

He was a founding member of the American Philatelic Research Library and a Trustee of this organization from 1969-early 1980’s.

The stamps of Canada, Mexico and Scouts on Stamps were his serious collections.  But he enjoyed something he called “Libations, Liver Pills, and Loose Ends.” In this way, he was telling all collectors that collecting stamps and related material is the least structured hobby in the world, anyone can do exactly as they wish.

The United States Postal Service’s Citizens’ Stamp Advisory Committee evaluates potential subjects for U.S. postage stamps and reports its recommendations to the Postmaster General, who makes the final decision. Emerson was a member of this committee for many years.