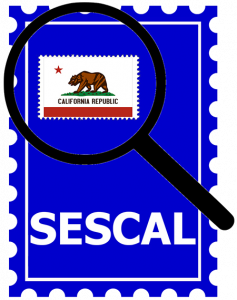 Welcome to Our Web Pages!

SESCAL is the annual World Series of Philately stamp exhibition held in the Los Angeles area as the major event of The Philatelic Society of Los Angeles.

Founded in the mid-1940s, this is the 78th year for this exhibition. In 2020 & 2021 because of the COVID-19 pandemic, there was no physical show.  But the record of holding a show every years remains unbroken.  SESCAL 2020 & 2021 consisted of a virtual show of Philatelic Literature.  Originally, SESCAL was held at various locations near downtown Los Angeles, including the Elk’s Club. From 1959 to 1976 the show was held in what was first a Statler Hotel and then became a Hilton Hotel.  In 1977 we moved out to the Wilshire District and the world-famous Ambassador Hotel. In 1988 the show moved to the closest hotel to Los Angeles International Airport (LAX) where it was held for 22 years. Originally the Hyatt at LAX, later operated by Wyndham, this hotel was completely refurbished and now carries the Radisson name. In 2010, we moved back to a Hilton property, the luxurious Hilton Los Angeles Airport Hotel, about 3/4 mile from the airport. In 2017, we moved to the Ontario Convention Center. After two years with no physical show (2020 &2021 because of COVID), We now have a new site at the Glendale Civic Auditorium in Glendale, CA.  We look forward with excitement to 2022 in this our new venue.

Long-time SESCAL chairman Carl Shaff II stepped down at the end of SESCAL 2016 because of health issues. His replacement was John Weigle in 2017.  In 2019 John announced his plan to step aside and as a result a co-chairman Ed Kawasaki was appointed. In 2020 Ed Kawasaki became the new General Chairman.

Founded in 1927, the objective of The Philatelic Society of Los Angeles is to promote, study, encourage and develop all aspects of philately with an emphasis on research and education.  It meets twice a month for presentations and philatelic sharing. Additional information is available at https://stampsla.com/